The QK-A034 is a sophisticated NMEA 2000 to WiFi and USB multiplexer, with added flexibility for your growing system. Enjoy a direct WiFi link to your NMEA network data, for convenient and flexible access to data and as the WiFi connection is 2-way, you can also use it to send data, including Waypoints to your chartplotter and autopilot and VHF messages.

In addition to bi-directional NMEA 2000 to WiFI and USB,

the A034 provides a seamless connection of NMEA 0183 and Raymarine SeaTalk1 input devices to your NMEA 2000 network,WiFi and USB devices.

The A034 is a flexible device and the connections can be tailored to your individual setup.

Below is an example setup. Whether you input devices (eg.GPS, AIS, wind. depth and other sensors) are SeaTalk1, NMEA 0183 or NMEA 2000, simply connect them to the correct input connection.

The A034 can be used out of the box for standard functionality or configured for additional sophistication.

Without Configuration: The multiplexer converts and combines data received on the listener ports and sends this data to NMEA 2000, WiFi and USB simultaneously. Default Baud rates: NMEA input 1 and 2: 4800bps and NMEA input 3: 38400bps 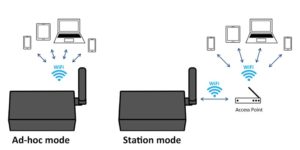 The WiFi module is set for direct Ad-hoc WiFi connection as default, with no need for a router. The SSID and password can be changed through QK-A034 configuration software, increasing security and memorability.

Up to 4 wireless devices can connect directly to the A034 in Ad-hoc mode.

QK-A034 can also be connected via Station mode using the Configuration software. This allows for greater range and remote access, as well as additional multi-device access.

The WiFi can also be disabled and be placed on Standby mode if desired.

Bi-directional WiFi: With 2-way WiFi, the A034 allows for wireless connection to autopilots and other NMEA devices, giving you the freedom to navigate, monitor and control from your iPad, iPhone, Android tablets and other WiFi enabled devices.

Bi-directional USB:  2-way USB the A034 allows the user to send instructions and data through USB from a laptop to all connected outputs. Frequently used to control autopilots and other NMEA devices from OpenCPN and other PC software, allowing the user to navigate, monitor and control from your laptop. This feature also allows for sending of test data for system testing and analysis.

What’s in the box?


1 = “SeaTalk” is a registered Trademark of Raymarine.

There are no reviews yet.

This site uses Akismet to reduce spam. Learn how your comment data is processed.